Apple introduced on September 14, the iPhone 13 and iPhone 13 mini are Apple’s newest flagship iPhones on the more affordable end and are being sold alongside the more expensive iPhone 13 Pro and iPhone 13 Pro Max. And also announced a new Apple Watch, and new iPads during a virtual event held in California.

Apple continues to differentiate its iPhone models with features unique to each device. So while the iPhone 13 might accomplish everything a customer needs, the pro models bring more compelling technology and better cameras, especially the flagship iPhone 13 Pro Max.

First, we’ll cover the features all four devices share, then break down each model individually. Size, display technology, and camera feature set each iPhone apart, but they have similar core technologies that we will be discussing first.

The iPhone 13 mini, iPhone 13, iPhone 13 Pro, and iPhone 13 Pro Max retain the same design language as their predecessors. They still have familiar flat edges, aluminum frames, and glass backs. The camera modules are a bit larger than last year’s iPhones, and the sensors inside are now rearranged diagonally. The phones are also a bit thicker this year.

From the front – the signature notch is smaller than ever on the iPhone 13 series, significantly reduced from last year’s iPhone 12 models. The smaller notch makes a particularly notable difference on the iPhone 13 mini as compared to last year’s model, where the wider notch on its already narrow screen forced some display icons to feel cramped.

The iPhone 13 series have a 20% smaller notch than last year’s iPhones. This is especially welcome on the mini and a noticeable upgrade from last year’s iPhone 12 mini, as its larger notch is taking arguably too much space on an already small 5.4-inch display.

Regardless of the smaller notch, all iPhone 13 models still pack the familiar Face ID technology inside of them. Face ID is used to recognize the user’s face for securely unlocking the phone, and can do so even in complete darkness.

The A15 is a processor built on the 5nm process with a 5-core GPU in pro models, a faster Neural Engine, and an advanced ISP. Apple says the new processor results from collaborative efforts to bring ideas to life, not just hit another spec goal.

The speed increases and advancements in machine learning intelligence enable many new computational feats, like the Neural Engine computing 15.8 trillion operations per second. Apple says this allows for features like the new Cinematic mode and Photographic Styles.

Apple differentiated the A15 Bionic between standard and pro iPhone models. Some new features like ProRes recording are restricted to the pro devices due to the difference in computing power. The A15 provides enough efficiency improvements that battery life is more than an hour longer in every model.

MagSafe remains a primary feature in the iPhone 13 lineup. The feature set hasn’t changed, though Apple is happy to tout the expanding accessory lineup for the system.

Since MagSafe is universal, users won’t need to purchase new accessories for compatibility with the new iPhones, except for maybe the case. The MagSafe Charger, Wallet, and MagSafe Battery Pack all work as before.

Apple did announce an update to the MagSafe Wallet that enables using the Find My network to locate it. This doesn’t replicate the functionality of an AirTag but does alert the iPhone of its last attachment location to help the user in finding it.

The iPhone 13 has a 6.1-inch display, an aluminum frame, and a dual-camera setup. It is positioned as the best choice for most by fitting between the smaller mini iPhone and more expensive pro models.

Apple has simplified the choice between models in its lineup by having each device offer specific capabilities that make each tier stand out. The iPhone 13 is the balance between features, price, screen size, and battery life.

The Super Retina XDR display is 28% brighter up to 800 nits for regular content, 1200 nits for HDR. In addition, the P3 color gamut and high pixel density mean text will pop, and photos and videos will appear sharper.

Apple didn’t change much about the rear wide-angle camera, with its f/1.6 aperture and 12MP sensor. The new wide lens has sensor-shift optical image stabilization thanks to the new diagonal camera position.

The most significant upgrade is in the ultra-wide-angle camera since it has far improved low-light performance over the iPhone 12. It is also capable of shooting night mode photos for the first time.

Not much else has changed for this model year-over-year beyond. Things like MagSafe, more 5G bands, and a smaller notch are available in every iPhone 13 in the lineup.

The iPhone 13 Mini comes with a 5.40-inch touchscreen display with a resolution of 1080×2340 pixels at a pixel density of 476 pixels per inch (PPI). iPhone 13 mini is powered by a Hexa-core Apple A15 Bionic processor. The iPhone 13 mini supports wireless charging, as well as proprietary fast charging. 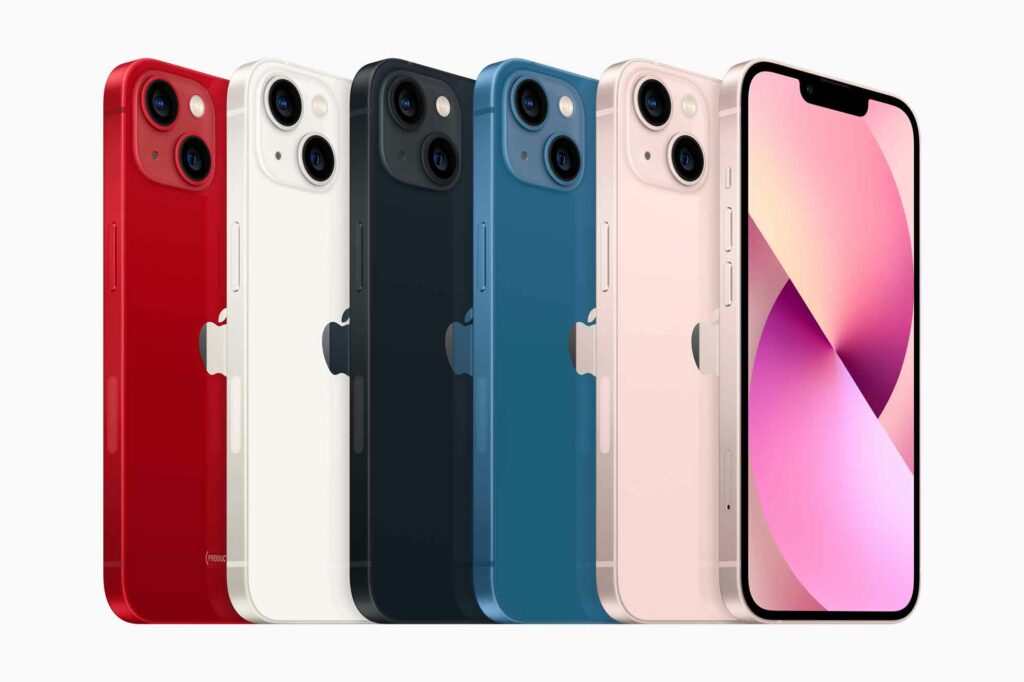 The iPhone 13 mini is a second-generation product that almost didn’t exist due to low demand in the first generation. While iPhone 12 mini owners showed a lot of passion for the tiny smartphone, sales didn’t reflect that passion.

It packs the same technology as the standard iPhone 13. The biggest differentiator is its battery life, with it having the smallest battery in the lineup.

Thanks to the A15 Bionic’s efficiency gains, the battery life has increased by about 1.5 hours. So, if battery life was an issue before, it should be less so now. The iPhone 13 Pro sets itself apart with a stainless steel band, three-camera system, and its new 120Hz ProMotion display. The better technology coupled with premium materials makes this high-priced device great for the iPhone power user.

The first thing users may notice on the pro models is the three-camera system. The iPhone 13 Pro has 12MP wide and ultra-wide cameras with improved low light performance, plus a telephoto lens for 3x zoom. In addition, the pro models also have LiDAR for AR scanning and depth data.

Camera improvements don’t stop at specs either — Apple is bringing ProRes recording at 4K 30fps to the pro lineup. Combine this with the Cinematic mode for video, and Apple expects you’ll be able to recreate a high-end cinematic experience with a device you carry in your pocket.

The other big story for iPhone 13 Pro is the new ProMotion display — a 120Hz dynamic refresh display running on OLED at up to 1200 nits. Depending on the content, the refresh rate can drop to as little as 10Hz, so battery life can be preserved when viewing static content.

Beyond the third camera, better display, and stainless steel band, the iPhone 13 Pro has similar technologies to the standard iPhone, like the A15 processor. However, Apple took the A15 even further with a more powerful 5-core GPU in its pro models. 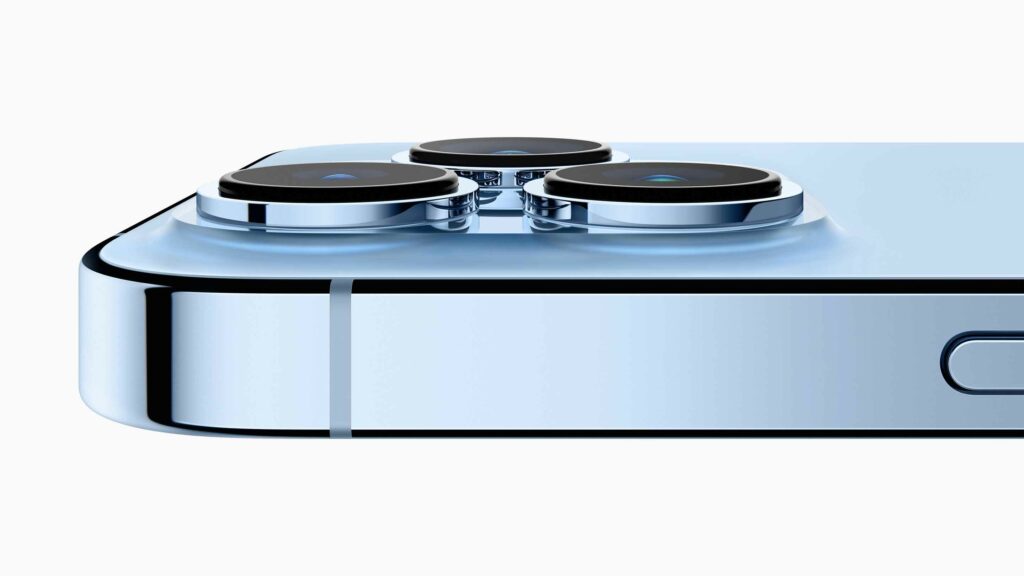 Like the mini iPhone and the standard one, the iPhone 13 Pro Max separates itself with its size. The 6.7-inch display uses the same ProMotion technology for 120Hz refresh in its OLED screen.

The larger size means a bigger battery and the longest battery life in an iPhone. In some iPhone generations, like the iPhone 12 Pro Max, Apple provides a special feature to the flagship device to differentiate. However, this year, the only differentiators are screen size and battery life. 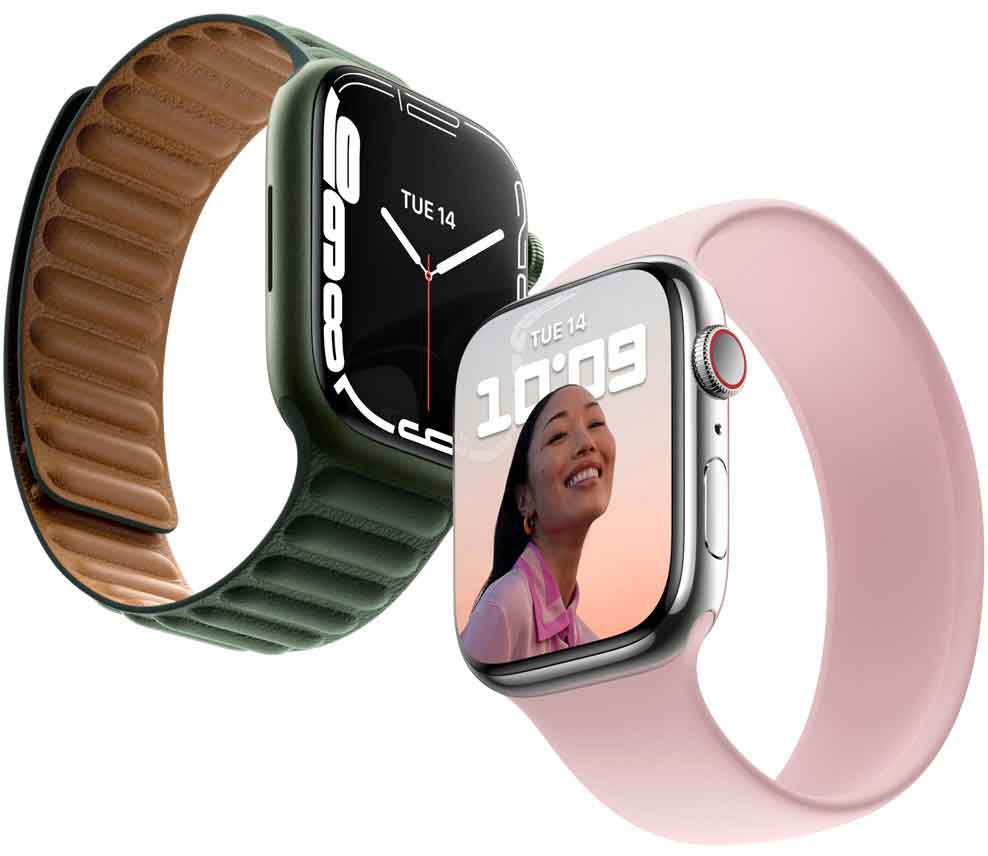 The key USP of the Apple Watch product lineup is its health and fitness features. While Apple hasn’t provided any significant additions on that front, you’re getting most of the commonly available features to track your health and wellness while on the go. The Apple Watch Series 7 offers blood oxygen saturation (SpO2) tracking using a built-in Blood Oxygen sensor. It is also capable of tracking heart rate using an electrical heart rate sensor that was first introduced on the Apple Watch Series 4 and is also available on the last-generation model. The smartwatch can also detect atrial fibrillation (AFib) and can provide an electrocardiogram (ECG) report.

Apple has provided watchOS 8 on the Apple Watch Series 7 out-of-the-box. The new operating system, which was unveiled at WWDC 2021 in June, comes preloaded with an upgraded Breathe app that is called Mindfulness to help enhance your wellness both physically and mentally.

With the larger display, the Apple Watch Series 7 also offers additional larger font sizes and a new QWERTY keyboard that can be tapped or swiped with QuickPath to let users slide a finger to type.

Apple claims that the Apple Watch Series 7 can last for up to 18 hours on a single charge. It is identical to last year’s model. Nonetheless, Apple says that the new Apple Watch provides 33 percent faster charging.

The Apple Watch Series 7 comes with an IP6X-certified build that is meant for dust resistance. There is also the WR50 rating for water resistance. Moreover, the new Apple Watch is bundled with a Magnetic Fast Charger USB-C Cable and supports all Apple Watch wristbands that are designed for earlier models. 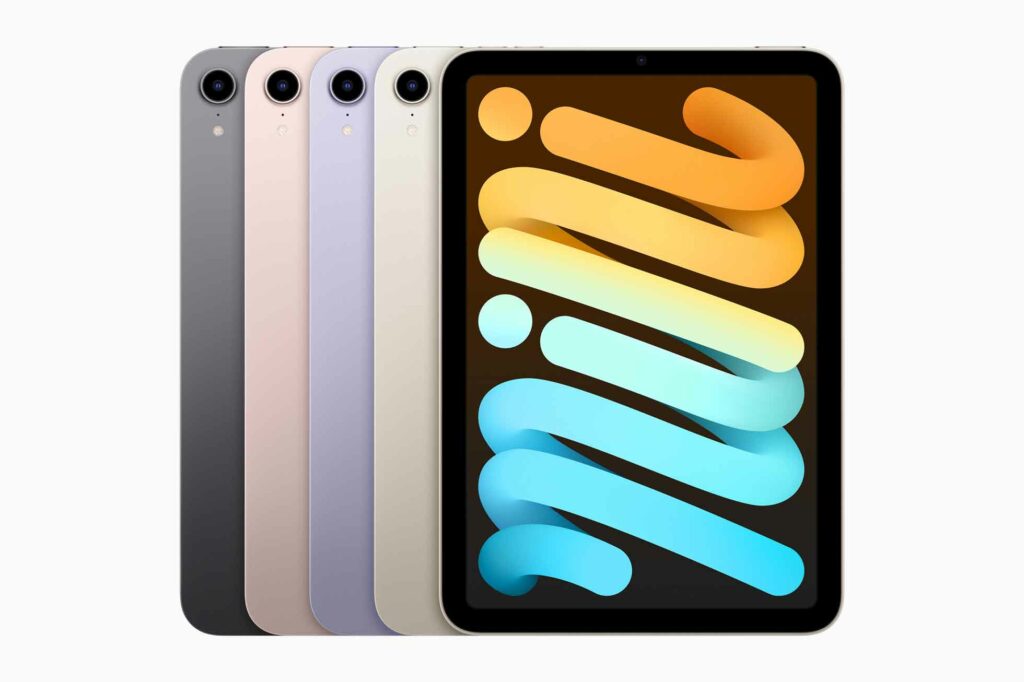 Apple introduced the new iPad mini on September 14 Event. The all-new iPad mini (2021) Wi-Fi comes with an 8.3-inch Liquid Retina display that is larger than the 7.9-inch screen available on the earlier iPad mini. The new model is also powered by the latest A15 Bionic chip that is rated to deliver up to 80 percent faster performance than the previous generation. The new iPad mini comes with a 12-megapixel Ultra Wide selfie camera with a 122-degree field of view. It also includes support for Center Stage from the iPad Pro. At the back, there is a 12-megapixel camera sensor that is paired with a True Tone flash and supports Smart HDR as well as 4K video recording. 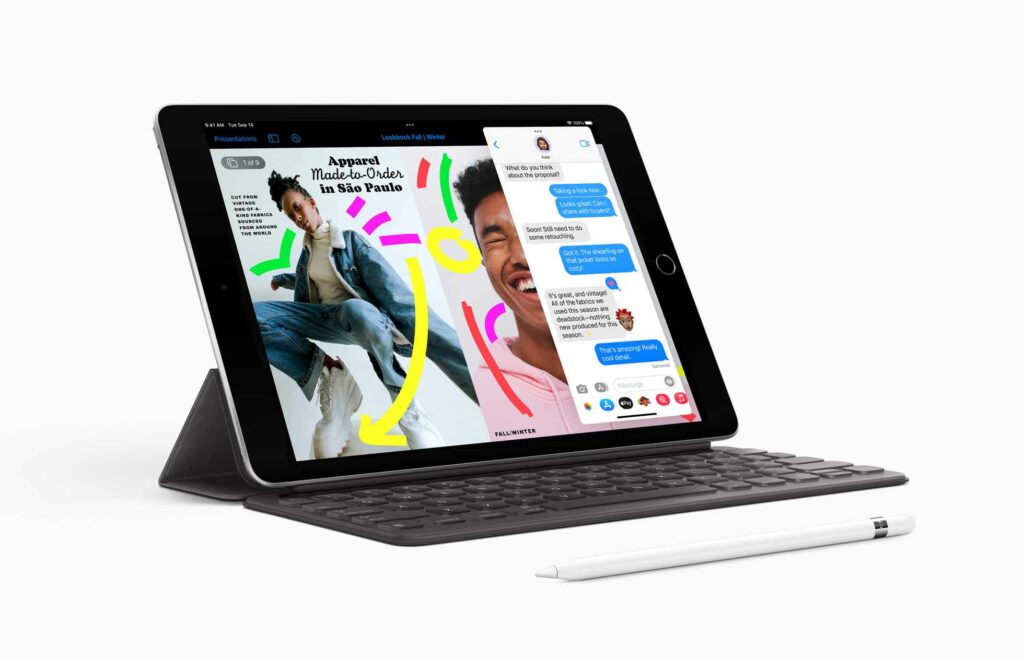 Apple also announced the new iPad (9th generation), featuring the powerful A13 Bionic chip that packs even more performance and capability into the most popular iPad, all while retaining its all-day battery life.

The new iPad features a 10.2-inch Retina display with True Tone, a 12MP Ultra Wide front camera with Centre Stage, support for Apple Pencil (1st generation) and Smart Keyboard, the intuitive iPadOS 15, and twice the storage of the previous generation.

The new iPad will be available beginning at end of the September month. And Wi-Fi models of iPad are available with a starting price of $329 (Roughly QAR. 1,250), and Wi-Fi + Cellular models start at $459 (Roughly QAR. 1,700), in silver and space gray finishes. The new iPad starts with 64GB of storage — double the storage of the previous generation. A 256GB option is also available.